Belgium forward Romelu Lukaku raced toward Tunisia’s goal and, after making contact with the goaltender, tumbled to the turf.

What he did next generated a lot of attention.

As he was getting up, Lukaku raised his left arm, signaling that he was fine. Then, upon returning to his feet, he turned toward the referee and lifted his right hand, gesturing that there was not a foul on Tunisia’s goalie, Farouk Ben Mustapha. Lukaku then approached the referee and insisted nothing was amiss.

That’s precisely why parents should showcase Lukaku’s act as an example of what to do … when there are so many instances of what not to.

Lukaku was widely celebrated because, sadly, his act stands in stark contrast to the ugliest element of “the beautiful game.”

Also known as diving, the act by one player of exaggerating when an opponent makes contact with him to influence the referee into providing a free kick or even handing out a yellow or red card.

In this World Cup’s first week, France’s Lucas Hernandez admitted to flopping in a 2-1 win against Australia, and Brazil superstar Neymar attempted a dive in the penalty area against Costa Rica. Fortunately, the referee, after consulting the video assistant referees, overturned his initial ruling of a penalty on Costa Rica.

During the 2014 World Cup, the Wall Street Journal pored through replays of the first 32 tournament matches and counted 302 instances of players seeking sympathy or a foul. That’s nearly 10 per match. In the first two games, Neymar toppled five times, only to bounce back up after a few seconds.

Trying to dupe the officials is gaining acceptance by some soccer luminaries. Former American standout Alexi Lalas, an analyst for Fox Sports’ World Cup coverage, told the Associated Press that he looks at diving “as a skill.”

“There are good dives and bad dives, and the act of embellishing an action, I don’t see as an insult to the game or the person,” Lalas said.

Such a perspective is flawed and dangerous, especially presented before young athletes.

That’s why Lukaku’s play needs to be highlighted and celebrated. 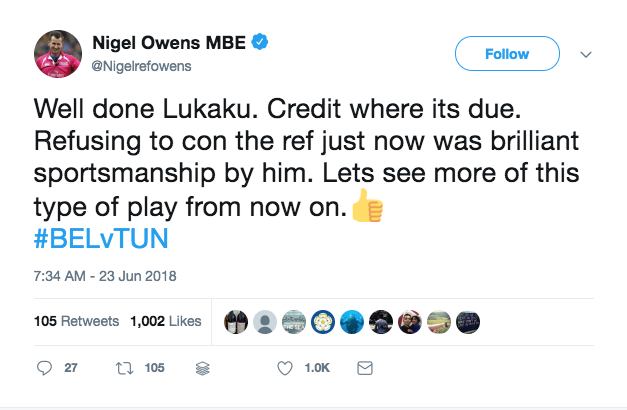 Lukaku, who stars for Manchester United in the Premier League, recently shared the story of the poverty he endured growing up in Antwerp, Belgium. And though each goal is precious, he’s tied for second at this World Cup with four goals, one behind England’s Harry Kane.

As the World Cup transitions out of the Group Stage, the games have even more meaning … which means there will be more diving and flopping.

But not all teams and stars operate that way, as Argentina superstar Lionel Messi showed Tuesday in a critical game against Nigeria. With his team protecting a 2-1 lead, Messi had a step on a Nigerian defender and was bumped near the penalty area. But Messi battled to maintain his balance and sprinted toward the ball, which had bounced toward the right sideline.

No drama. No antics.

Sean K. Jensen was born in South Korea, but he was raised in California, Massachusetts and Virginia, mostly on or near military bases. Given his unique background, he's always been drawn to storytelling, a skill he developed at Northwestern University and crafted for 16 years as a reporter and columnist, almost exclusively covering the NFL.

He’s now an inspirational speaker and author of The Middle School Rules, a book series that tells the defining moments of professional athletes. He is also the creator of Model Student Athlete, a video series for young athletes, and Winning Is Not Everything, a podcast that aims to “bring sanity back to youth sports” through conversations with high-character athletes, coaches and parents. You can learn more about him at his website, SeanKJensen.com.

Demonstrating Coachability and Character During the Coronavirus Recruiting Dead Period

College coaches look for more than just athletic ability and academics when evaluating prospects; they care about potential recruits’ coachability and character, too.

Tips and Drills to Improve Your Front, Side and Roundhouse Kicks

These are great workouts for any gymnast, but especially for those beginners. Drill number two is a favorite!

Youth sports clubs and their members are connecting through virtual technology.

The Quarantine Skills Academy is allowing athletes to take control of their own progression.

A Stay At Home Journey

Train Your Upper Body With an At-Home Basketball Workout

Even without access to a gym, you can improve your lower-body and upper-body strength

Are Your Kids Outside Enough?

Kids can never be outside too much

Some tips to help athletes focus on mental health during the pandemic.

Sports Can Teach Us to Overcome Hardships