The Lacrosse Goalie's Guide to Clearing

Clearing is just as important as saving the ball and it should be a favorite of all goalies because it means either you've just made a save or your defense has forced a turnover. Is there a better feeling than that?

In addition, the clearing team has 7 players on their half of the field while the riding team only has 6. Thus putting the advantage in our favor.

Let me cover a few concepts in this post that will make you a much more effective goalie when it comes to leading the clear.

During an NFL passing play, the quarterback has progressions. Meaning he'll look at his 1st receiver and if he's not open, he'll move to the 2nd, then 3rd, and if they're not open, he'll take off scrambling (or take a sack).

Similarly after making a save, the goalie should go through a series of progressions to initiate the clear. Here's the progression I recommend:

Remember you can only hold the ball in the crease for 4 seconds after making a save. Therefore, progressions 1-3 are very quick reads.

During practices you also need to train your middies to be looking for an outlet pass as they run up the field. Middies who don't look back to give the goalie an outlet option is a major goalie pet peeve of mine.

Give the space a look and if nobody is open then move onto the next progression. If no open middies or defensemen are open, then you must exit the crease on foot to avoid the 4 second turnover.

As you practice these progressions they should become second nature.

Since the clearing has 7 players vs. the riding team's 6 players we can always find a 2 on 1 somewhere on the field. Goalies must be able to spot and use 2x1's to maximize the chance of a successful clear.

If you went through your progressions with no outlet pass and exited the crease via the back we'll typically find a 2x1 with one of our defenseman and a riding attackman.

As the goalie moves upfield the attackman will be drawn towards the goalie and we can lob a pass over his head to our open defenseman.

In the event that the attackman doesn't bite and stays put on your teammate then simple carry the ball upfield yourself. This is why I've advocated that all goalies need to have great stick skills. If nobody from the riding team picks up the goalie then he continue to run over midfield and find an open attackman or middie to outlet to.

And of course if nobody continues to pick up the goalie on the offensive side we can attempt to live every goalies dream like the video below. Notice how this goalie 1st goes through his outlet progressions, sees nobody open and then exits the crease. He attempts to force a 2x1 but the attackman stay home on the defenders and so he simple carries it over midfield.

NOTE: I DO NOT RECOMMEND that goalies attempt to make dodges in the offensive zone as this could result very easily in a turnover or even worse in injury:

Here are the different types of passes goalies will need to master to dominate clearing.

When we see breaking middies in the clear we typically want to use a lob pass.

In this pass we'll put some air underneath our throw to allow middies to run under the ball and make the catch. Make sure you don't lob the ball anywhere near the midfield line since opposing players run up and crush your teammates. Similarly, if you see anyone behind your teammate don't use the lob pass for the same reason.

Throwing "hospital passes" (i.e. passes that put your teammates in the hospital) is a quick way to make enemies amongst teammates.

Remember when throwing to teammates on the run, you want to lead them a little bit. Don't throw to where they are but to where they are going to be so that they can catch the ball in stride and continue to move up field.

The bullet pass is a hard direct throw right to a teammate. Goalies will use this type of pass when a teammate is standing still or moving towards the goalie.

This pass is much better with a midfielder than with a defenseman because its a little harder to catch. However if you're playing in a more experienced league or your defenseman have good stick skills they should have no problem making the grab.

Which pass to use?

Goalies must know when you use the lob or the bullet.

If a defending player is behind your teammate, the bullet is the pass to use. Sometimes I'll even throw the pass slightly short to make sure my teammate moves towards the ball and doesn't drift back into riding attackman behind him.

If the riding attackman is between the goalie and middie, then the lob pass is the ball to throw.

Practice these passes until you can throw dimes every single time. A single bad pass could result in a turnover and more time on defense for you and your teammates. 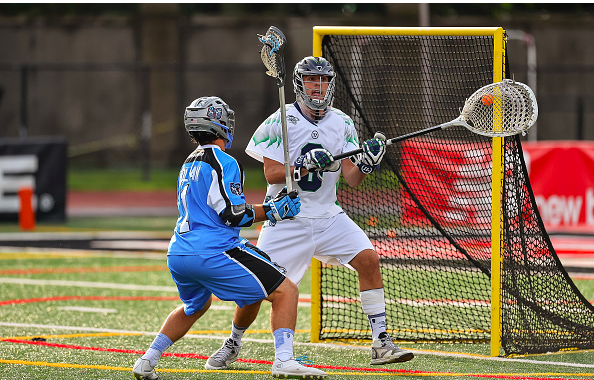 During a normal warmup with my goalies, I'll grab another player and have the goalie make an outlet pass after each save instead of simply throwing the ball back to the shooter.

The outlet player should be running away from the goal to simulate a real-live situation. This gets the goalie accustomed to immediately looking up after the save and putting the right touch on the ball to initiate the clear.

Of course all goalies need strong stick skills too. So be sure to add that practice into your regiment so that your passing, throwing, and catching is just as good (if not better) than anyone else on the team.

Practice throwing both lob and bullet passes until you consistently hit your target.

If you don't have a teammate to play catch with practice bullet passes on a wall and practice throwing lob passes into a garbage can.

Once you have those passes down, add movement. While many times a goalie will be able to make an outlet from stationary position in the crease, there are other times when you will be on the run, possibly being harassed by a riding attackman.

Practice throwing your bullet and your lob passes while on the run - first at a jogging pace and then a full sprint.

One Tip from Years of Playing

Here is one move that I learned from an old goalie that I used quite frequently when playing and still teach to my goalie students today.

It is illegal for an offensive player to contact the goalie's crosse when the goalie has possession of the ball in the crease. The penalty for such is an offense being a free clear.

In my playing days I earned numerous free clears immediately after making a one-on-one save.

Often times with those saves the ball gets popped up into the air as the goalie pushes it upwards. Upon catching the ball, leave your stick right in the attackman's face for just a second. Almost inviting him to hit your stick.

They're typically so frustrated from just having gotten stuffed at the doorstep that they'll always take a swing at your stick. Plus many don't know the rule that the goalie's stick cannot be hit while he has the ball in the crease.

And if they don't go for it, fine. Go through your normal clearing progressions that I discussed above.

Hopefully by now you understand the importance of clearing in a goalie's game. You're not doing your team any good if you can only make saves but cannot clear.

All-American goalies need to be lead the clear and get their team the ball on offense.

If you enjoyed this post on clears, please share it with other goalies, players, parents and/or coaches.

What tips do you have for making your team better at clears?