The Keys to Playing Goalie with a Wide Base Stance

As I've said numerous times in my posts, there are a lot of different styles when it comes to lacrosse goaltending.

When you look at photos of these current and former University of Denver goalies, what do you notice?

That's not your standard "feet shoulder width apart" stance you've heard so many coaches say. That base is wide, baby.

In this post we'll explore a style of lacrosse goaltending known as the "Wide Base Stance".  What are the benefits? What are the cons? And most importantly, should you incorporate a wide based stance in your own game?

History of the Wide Base Stance

There's quite a few lacrosse goalie stance tutorials out there on YouTube right now and in nearly everyone you'll hear the coach mention some form of - "feet shoulder-width apart" in the stance.

I'm not suggesting that approach is incorrect but with the game of lacrosse adapting as it has, some lacrosse goalies have started using different techniques to become more effective at making saves.

Setting up with a wide base is one of those techniques. 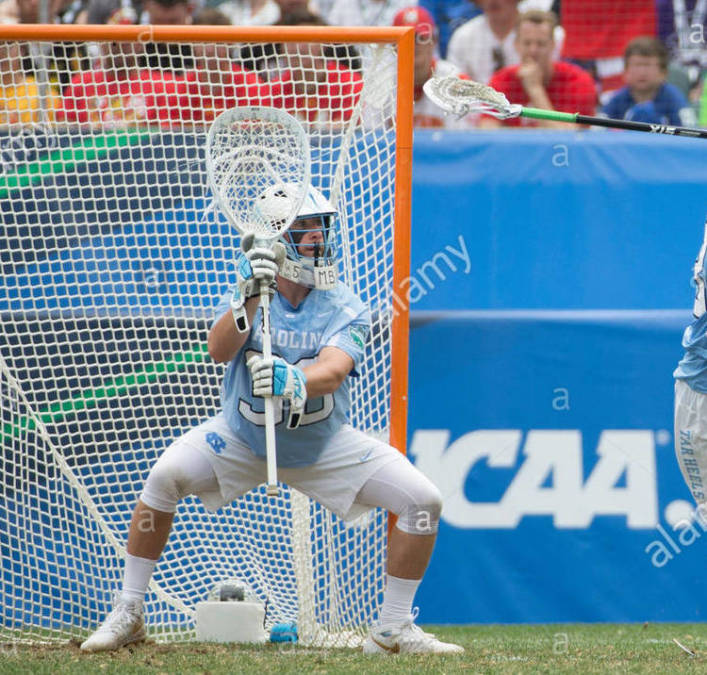 Trevor Tierney was the 1st lacrosse goalie that I saw really use this technique and given that he now coaches at the University of Denver it's no surprise that their goalies use a wide base stance. Ryan LePlante and Denver's current goalie Alex Ready both setup nice and wide in their stances.

But we're starting to see wide base stances become more and more common today's game where high velocity shots with perfect accuracy require goalies to occupy more space initially and then make a shorter movement to the shot path.

Next time you tune into an NCAA game you're more likely to see the wide base stance versus a normal stance nowadays.

So let's discuss how wide base play works. When we setup in our stance using a wide base, our feet are much wider than shoulder width. 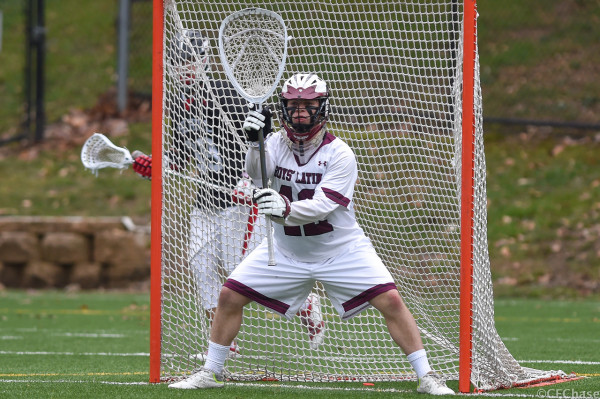 Depending on your physical features, your approach to a wide base will vary. You don't want to be so wide such that it's not comfortable and takes you out of an athletic position. Always athletic is a key principal of great lacrosse goalie stances - wide or normal.

But the feet should be much wider than shoulder width. This will provide many advantages which I'll discuss in depth in the next section.

The wide base is best paired with a shallow or flat arc and lateral steps to the shot path.

The wide base is not conducive to moving far distances quickly on the arc that are required when you're playing a high or even a normal arc. Thus nearly all wide base goalies also play a flat arc.

The lateral step will give the goalie more time to see and react to the shot to come up with a clean save. It's easier to move lateral in a wide stance versus at a 45 degree angle towards the shot.

Basic "good stance" principles still apply to the wide base arc. That is you should be:

Essentially we can think of the wide base method as “more coverage, less movement.” And with shooters ripping a shots harder and harder these days, less movement is definitely welcome.

Pros of the Wide Base Stance

For those goalies who choose to use a wide base stance it comes with a set of benefits. 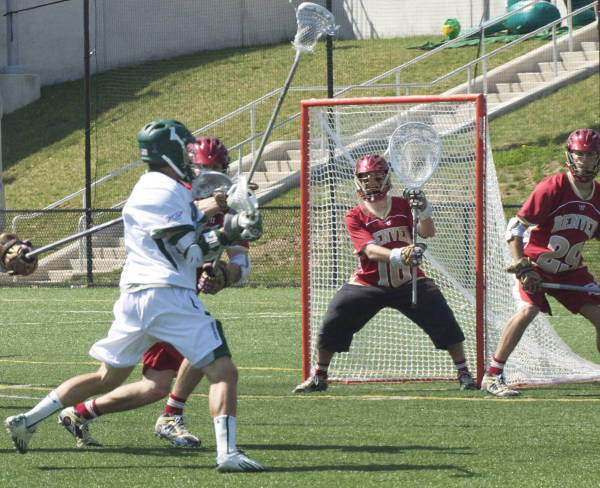 The wide base stance shortens the step required to reach the shot.

In some cases, like with larger goalies and when the shooter is at an angle, you might need no lateral step to reach a shot.

Notice in the picture above of Denver goalie Ryan LaPlante. His feet are setup wide enough such that he doesn't need to step laterally to reach either side of the goal. Every shot on goal is already within his stance's wide frame.

Check this example from Trevor Tierney's Evolution of Goaltending Series which is a highly recommended watch if you haven't seen it.

He demonstrates a wide base vs. normal stance. He exaggerates the normal stance a little to prove his point that wider is better but we can definitely agree that the wider base equals less movement to reach a shot.

For what its worth, I feel the wide base stance is more intimidating to shooters.

You’re standing tall and big and just you look much more physically imposing. Showing confidence in your stance is crucial and just plays right into the mental side of things. 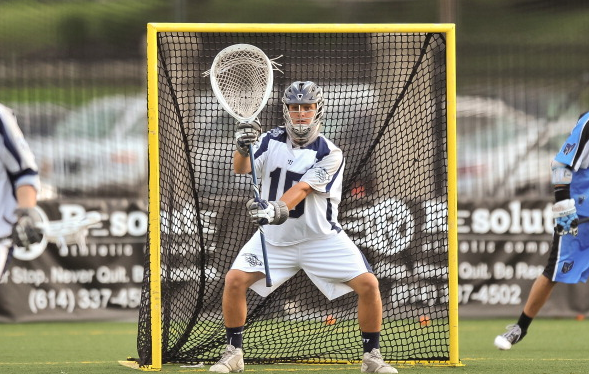 Cons of the Wide Base Stance

There are a few cons to playing with a wide base.

One of the main things is that you lose some explosiveness. By setting up with our legs spread out we lose a little power.

Many goalies trying this stance out for the 1st time complain of being uncomfortable and not being able to move as freely. This style takes a little getting used to so definitely try to work it into practice before debuting it in a game.

If you are a smaller youth goalie, setting up in a wide base might not be ideal as it makes you even shorter thereby limiting your ability to reach those top-shelf shots.

Another con of the wide base stance is that it really opens up the space in between your legs, aka the 5-hole shots. If you're a goalie who struggles with that particular type of shot this style of play may not be for you as you're really exposing yourself and inviting shooters to rip it five-hole.

Moving along the arc is a little different with the wide base. Not to say perfect balance can't be learned but sometimes goalies have trouble initially with quickly moving from one spot to another on the arc in a balanced fashion.

As I mentioned above the wide base is really almost required to be paired with a flat arc and lateral steps. If you're a goalie used to playing normal width, normal arc with 45-degree steps, that can be quite a drastic change that takes some time to get accustomed to.

You may find your own cons when trying out a wide base, however, these are the only real issues I found with goalies who go with this style.

The wide base stance is one where you setup, well, wide! It limits the amount of movement necessary to reach a corner shot and for that reason, we're seeing many more goalies adopt this style of play.

Overall, its entirely up to you whether a wide base would benefit your style of play. Goalies can have success with a wide base or with a feet shoulder-width apart setup.

However, don’t make any assumptions off of purely reading about the stance, get out and try it! I'd love to hear about your experience with the wide base stance if you try it out.

Anyone other lacrosse goalies using a wide base stance? Any further questions about this style of goalie play? Let me know about it in the comments below.